For more than 150 years, The New York Times has been one of America’s most trusted newspapers. Known for its award-winning blend of investigative journalism and sharp political commentary, the paper has many loyal readers worldwide.

Like all print media, The Times has also seen massive declines in print circulation over the last few decades — but it didn’t just sit on its laurels as digital outlets started dominating the market.

As you’ll see from these New York Times readership statistics, the paper has managed to stay relevant and maintain public trust in the internet age. Its website was one of the first to introduce the so-called “paywall,” but that didn’t stop it from attracting new subscribers.

Here we’ll examine the data on Times’ print and digital readership and discuss its future plans.

In the year when most newspapers saw major losses, The New York Times was no exception. Yet despite the COVID-19 pandemic and the financial crisis it caused, the esteemed paper suffered a minimal loss of revenue — from $1.812 billion in 2019 to $1.783 billion in 2020.

Traditionally, The New York Times’ revenue is the highest in the year’s final quarter. If we only look at the numbers from Q4 of 2020, we can see that the quarterly revenue has actually gone slightly up year-over-year — from $508.36 million to $509.36 million. While this is only a minor increase, it’s still significant, considering how financially challenging 2020 was for most media.

Most newspapers got the largest share of their profits from advertising in the past. In 2008, this also applied to The New York Times — $1.771 billion of the paper’s $2.939 billion annual revenue that year came from selling ad space. However, things have changed since then.

Advertisers are now shifting to digital and have significantly reduced their spending on print. As such, only $392.42 million of the company’s $1.783 billion revenue in 2020 came from ads.

4. The number of New York Times’ digital subscribers has been growing steadily since 2014.

Unlike many competitors, The Times has managed to grow its digital subscriber base each quarter for the past seven years. From 799,000 digital subscribers in Q1 2014, the number has gone up to an all-time high of 5.09 million in Q4 2020 — an impressive 537% increase.

Although 2020 was financially rough for all media outlets, The Times managed to significantly increase its digital subscriber base. The New York Times subscriber numbers went up from 3.43 million in 2019 to 5.09 million at the end of 2020, marking a 49.4% increase year-over-year.

6. The New York Times is the most popular newspaper among US digital news consumers.

Almost two-fifths (39%) of Americans who subscribed to digital editions of print newspapers in 2020 chose to support The New York Times, readership statistics reveal. The Washington Post, another paper widely perceived as left-leaning, ranked second with 31%. Finally, 30% of US digital subscribers opted for internet editions of their local newspapers.

7. 16% of the paper’s subscribers live outside of the United States.

The New York Times isn’t only popular in the US — it also has many subscribers abroad. Looking at The New York Times readership demographics by country, most of the paper’s international readers come from other English-speaking countries like Canada and Australia.

8. 10% of Canadians and 6% of Australians regularly visit The Times’ website.

In both these countries, Times ranks as one of the most popular digital news sources.

The paper has long tried to conquer these two markets, and its efforts seem very successful thus far. According to New York Times readership demographics, Canadians make up 27% of its international subscriber base. By some estimates, this means that the company has more digital subscribers than any of Canada’s own media outlets.

In 2019, the paper had 900,000 print subscriptions. However, by the end of 2020, it had about 833,000 print subscribers left. While the rate at which The New York Times is losing subscribers is by no means insignificant, it’s in line with the general downward trend in print journalism.

11. The Times intends to bring its subscription numbers up to 10 million by 2025.

Back in 2016, the company set the goal of bringing The New York Times’ subscription numbers — print and digital combined — up to 10 million by 2025. As of February 2021, The Times is still optimistic about reaching this goal. The massive online subscription growth in 2020 is very encouraging, especially seeing as some digital services’ prices have gone up. 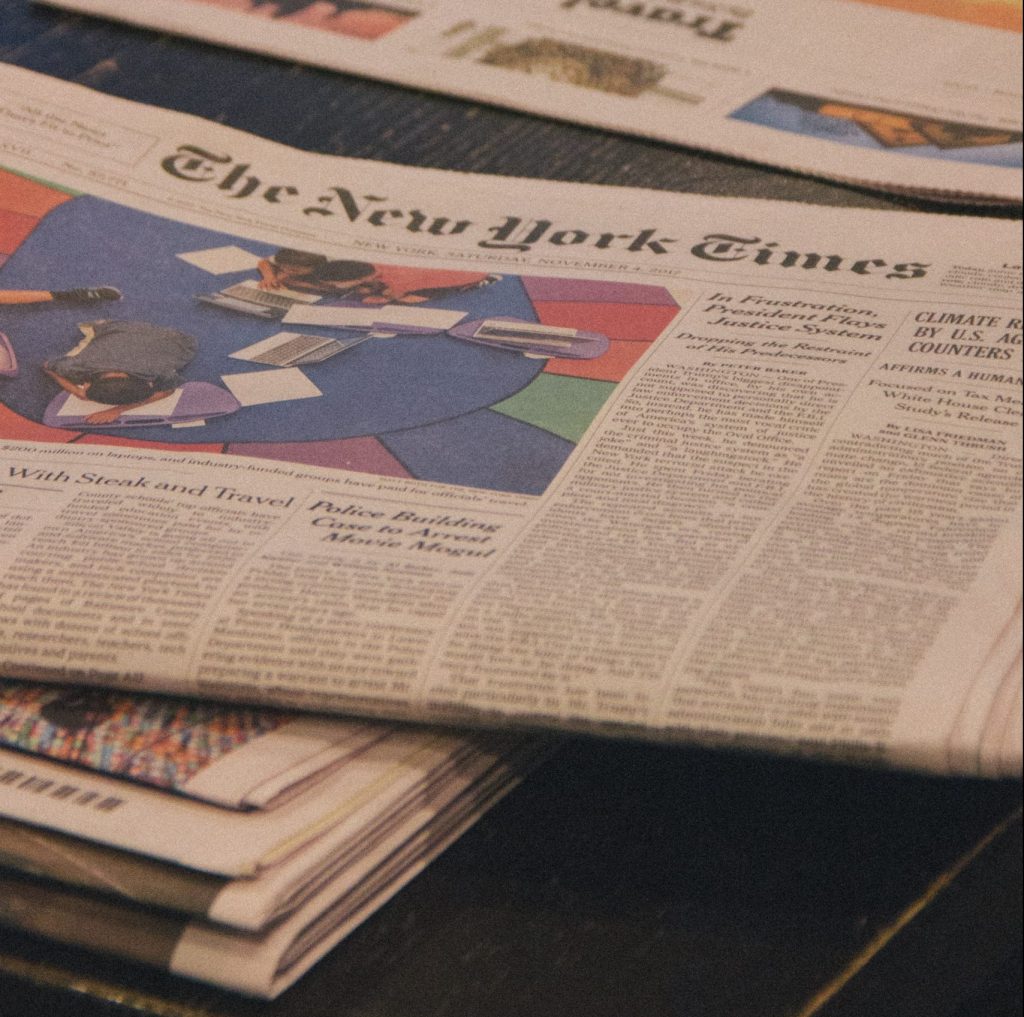 The New York Times’ target audience primarily comprises people under the age of 49, who are also the preferred demographic for most advertisers. This age breakdown shows that the paper has successfully reached its target readership and maintained its interest in the topics it covers.

14. The paper’s online male readers are younger than their female counterparts.

Interestingly, most of the male readers (49%) fall into the 35–44 age bracket (older millennials and young Gen-Xers), while most females fall into the 55–64 group (baby boomers).

15. 91% of The New York Times readers identify as Democrats.

As for political affiliation, more than 9 in 10 people who cite The New York Times as their go-to news source identify as Democrats. For comparison, only 7% say they’re Republicans, while the rest either identify as Independents or don’t have any political leanings.

16. More than two-thirds of The Times’ readers are white.

The New York Times audience demographics also reveal a significant discrepancy in its racial and ethnic makeup. According to research, 71% of the paper’s readers are white, 10% are Latino, 4% are Black, and the remaining 15% belong to other groups.

17. 72% of the paper’s readers have at least a university degree.

Compared to other popular left-leaning outlets, The New York Times has the most educated readership. While 72% of the readers have at least a university degree, another 21% say they’ve finished college. Only 7% of the readership doesn’t have a higher education degree.

Not everyone who reads The New York Times comes from an affluent household. According to the most recent survey, 25% of the paper’s readers earn between $30,000 and $74,999 per year, and 26% have an annual household income under $30,000.

19. The average Times reader is well-informed and politically opinionated.

Research shows that 40% of the readers care about overseas events, and 24% are also eager to learn about other cultures and lifestyles. Additionally, more than 33% of the paper’s readers say they would participate in civil protests regarding the issues they care about.

20. 49% of Americans believe Times is a trustworthy news source.

Considering how many people read The New York Times, this level of trust among the American public isn’t surprising. While 21% firmly believe Times is a trustworthy news source, 28% describe it as mostly credible. Only 15% of Americans say they don’t trust the paper at all.

For comparison, only 29% found it inappropriate to make this information about the then-US president public. People’s opinions on this move depended mainly on their political affiliation. Whereas 80% of Democrats expressed their support for this editorial decision, only 23% of Republicans did the same.

Print circulation in the US was at an 80-year low in 2020. The pandemic-related distribution difficulties only made the problem worse, and the negative effect also applied to The Times.

According to data from the year’s first quarter, The New York Times’ daily circulation was 410,562 copies. The paper placed third, behind The Wall Street Journal and USA Today. These were also the only three newspapers in the US to circulate more than 250,000 copies a day.

23. The New York Times’ Sunday circulation was more than double that number.

In the first three months of 2020, the paper’s Sunday edition circulated 876,178 copies — more than twice the circulation of its weekday issues. Since USA Today doesn’t come out on weekends, this puts The Times in a very close second place behind The Wall Street Journal. For comparison, the Sunday edition of the News Corp-owned paper circulated 995,684 copies.

24. The paper’s circulation is the highest in New York and California.

Unsurprisingly, The New York Times’ readership numbers are the highest in the State of New York. The Sunday edition in 2020 circulated 207,188 copies there. California is another of the paper’s strongholds, with 101,061 copies of the Sunday issue in circulation.

The New York Times’ circulation in 2020 was the lowest in North Dakota, where the paper’s Sunday issue only had 165 copies in distribution. Other states with low print circulation included Montana (214), South Dakota (232), Wyoming (316), and Mississippi (419).

A look at New York Times’ circulation by year points to a massive drop in the paper’s print readership. Over the last two decades, the weekday circulation went down by 63.4% from 1.12 million copies in 2000. The Sunday edition didn’t lose as many readers, but the decrease is still significant — 48% from 1.69 million copies distributed 20 years ago. 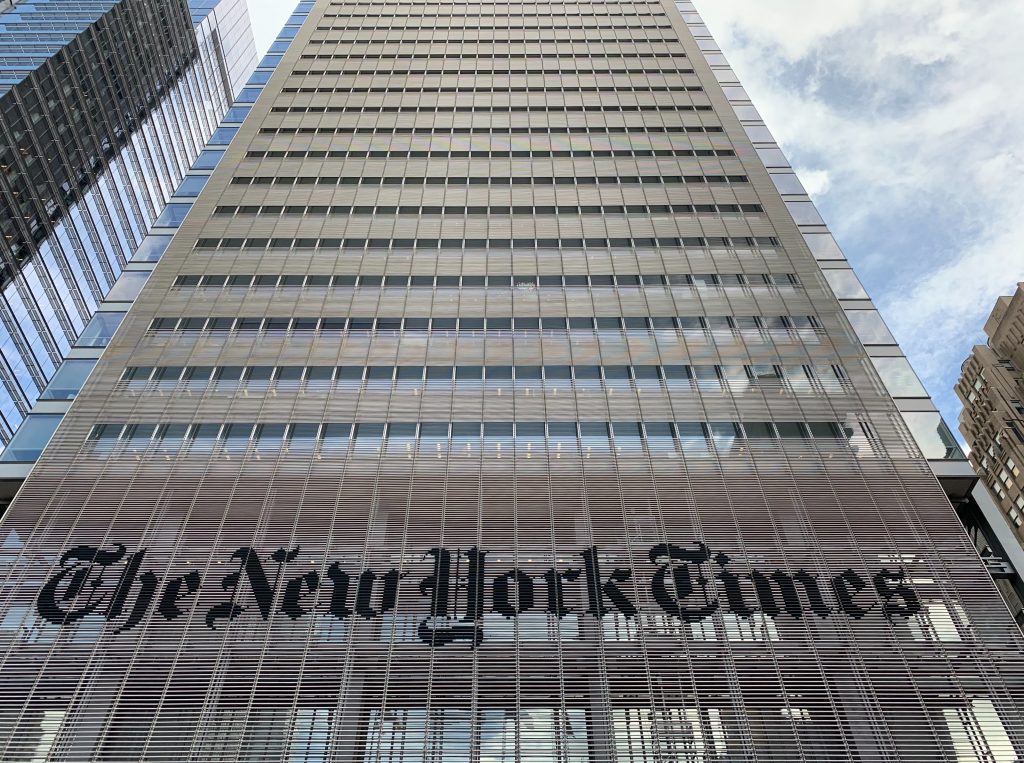 All things considered, the future looks bright for The New York Times.

Several internal scandals hit the paper in 2020, but they didn’t affect its popularity or the public’s trust in its news coverage — in the United States or abroad. What’s more, it ranks among the most popular outlets in other English-speaking countries, particularly Australia and Canada.

Even though its print readership is declining, the huge spike in online subscriptions in 2020 is certainly encouraging. The Times and its website attract mostly young, affluent readers, which will surely help attract advertisers once the pandemic-related financial crisis is over.

Who reads The New York Times?

What is the readership of The New York Times?

According to 2020 data, The New York Times’ website alone had 130 million unique monthly readers. This is on par with its readership from three years ago and a 100% increase from 2016. There’s no way to determine how many readers the print edition has, but considering the paper’s circulation figures, the number of readers is likely in the 2–3 million range.

How many copies of The New York Times are sold daily?

On average, The Times circulated 410,562 copies of its weekday edition in 2020. While this number is down from 2019, it’s in line with the industry’s general downward trend. The paper currently ranks as the third-most circulated in the US, behind The Wall Street Journal (994,600 copies on weekdays) and USA Today (486,579 copies).

What is the circulation of the Sunday New York Times?

Sunday editions of print newspapers traditionally sell a lot more copies than their weekly counterparts — and this is also true for The Times. The paper’s average Sunday circulation in 2020 was 876,168 copies, more than twice the number of copies it distributes on weekdays. On Sundays, The New York Times ranks as the second most-circulated paper in the US, not far behind The Wall Street Journal (995,684 copies).

How many subscribers does The New York Times have?

The paper managed to attract 1.66 million new digital subscribers in 2020 and reach a total of 5.09 million. Of this number, 1.6 million subscribe to the company’s non-news online services like Cooking and Games (which also includes the paper’s famous crossword puzzle). As for print, New York Times readership statistics show a 7.4% annual drop in subscriptions. At the end of 2020, the paper had 833,000 print subscribers — down from about 900,000 the previous year. Despite this, the company is still on track to reach its target of 10 million total subscribers by 2025, a goal its executives announced back in 2016.