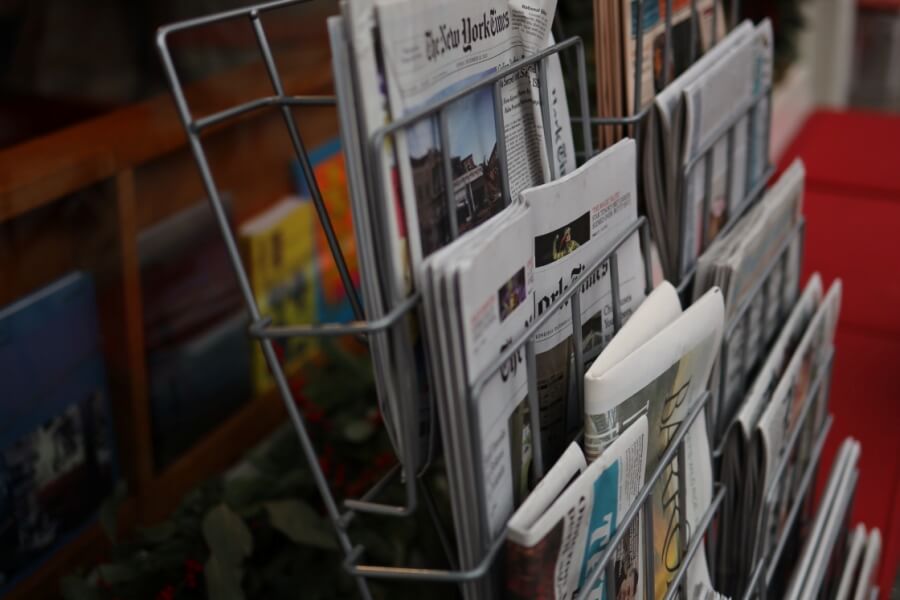 When it comes to print media, the tabloid vs. newspaper battle is still raging in today’s digital world. The terms tabloid and newspaper (also known as a broadsheet) refer to the papers’ formats, but they’re also synonymous with the type of journalism that characterizes them.

Among the enjoyers of traditional journalism, people have different preferences when it comes to reading the news. While a great deal of readers prefer to stick to the more traditional broadsheet writing style, others enjoy reading tabloids with their flashier, more sensational headlines.

But what are the fundamental differences between these two formats? Let’s take a closer look.

According to Merriam-Webster, a tabloid newspaper is about half the page size of an ordinary broadsheet newspaper. Because of their smaller size, tabloids are typically shorter in length than their broadsheet counterparts and often have more pictures.

Although they tend to be more entertainment-focused, tabloids can also report on serious news, including politics and current affairs. However, readers can’t expect entirely objective and unbiased reports, as the tabloid format likes to use sensational writing and include puns in their headlines.

Compared to tabloids, broadsheet newspapers are typically longer in length and bigger in size, with considerably fewer pictures. They also take a more traditional approach to journalism, with a focus on more serious news stories — criminal cases, political coverage, and financial reports.

However, even broadsheets can report tabloid-style news stories. They often do so in a way that is more objective and less sensationalized.

When telling the difference between a broadsheet and a tabloid newspaper, there are a few essential points. We’ll discuss them below.

When it comes to the quality of their content, broadsheets typically have the upper hand. This is because they tend to focus on more serious news stories and take a more objective approach to reporting.

It’s true that tabloids have the reputation of being a less serious read than broadsheets, but that doesn’t mean they cannot produce high-quality content as well.

As mentioned, the terms tabloid and broadsheet often refer to the types of journalism that characterize these two types of publications. While broadsheets use a more formal and straightforward approach, tabloids use more colloquial and modern slang.

Headlines also play a big part in presenting the news. Broadsheets prefer keeping their headlines plain and simple, while tabloids use buzzwords and extravagant wording to grab the reader’s attention.

When it comes to presentation, tabloid newspapers are more visually appealing than broadsheets. Tabloids will often use more pictures to better cater to their audience. However, there are still plenty of people who favor the more traditional look of a broadsheet newspaper.

That said, there is some overlap between the two styles of publication. Both types of newspapers will report on major news events, but they often do so in different ways.

Based on research, broadsheets do not target a specific group of individuals as they are more detailed, formal, and hard to digest.

However, tabloids cater more to younger readers and people on the go. That’s because they are much shorter, simpler, and more engaging than broadsheets.

Similarities Between Tabloid and Broadsheet

In spite of their differences, there are also some similarities between tabloid and broadsheet newspapers.

For one thing, both types of publications are usually available in print and online. Additionally, both tabloids and broadsheets report on a wide range of topics, from hard news to entertainment.

Tabloid vs. Newspaper: Our Takeaway

So, what’s the verdict? Are tabloids and broadsheets doomed in the digital age? Actually, not at all. As our article shows, both tabloid and broadsheet newspapers are still read by a massive number of people.

If you’re a publisher looking to reach a vast audience with general news, a broadsheet is probably your best bet. But if you want to appeal to a niche market, share salacious stories, or engage in yellow journalism, go for a tabloid.

Are there any credible tabloid publications?

In a world where fake news is all over the social media and broadcasting channels, it can be hard to know who to believe. This is especially true for tabloid publications, which often print sensationalized stories based on little more than gossip and speculation.
However, some of the most respected tabloid newspapers are published by American Media Inc., including the National Enquirer, Star, The Globe, and National Examiner. Similarly, The Sun in the UK has also been responsible for some major scoops over the years. So while tabloid publications may not always be trustworthy, some are worth paying attention to.

What is the purpose of tabloids?

Tabloids are a type of newspaper typically characterized by their gossipy content and sensationalist headlines. While they are often derided as being trashy and unserious, tabloids are constantly increasing their reach. Their over-the-top and shocking headlines aim to attract the broadest audience possible and generate profit for their publishers.

Are broadsheets more reliable than tabloids?

When comparing a tabloid vs. newspaper, it’s generally agreed that broadsheets are the most trustworthy source. Their larger format allows for more extensive reporting, and their articles are often written by experienced journalists. However, tabloids shouldn’t be entirely disregarded. While they may not always be accurate, they often break stories that later gain enough traction for broadsheets to pick them up, too.