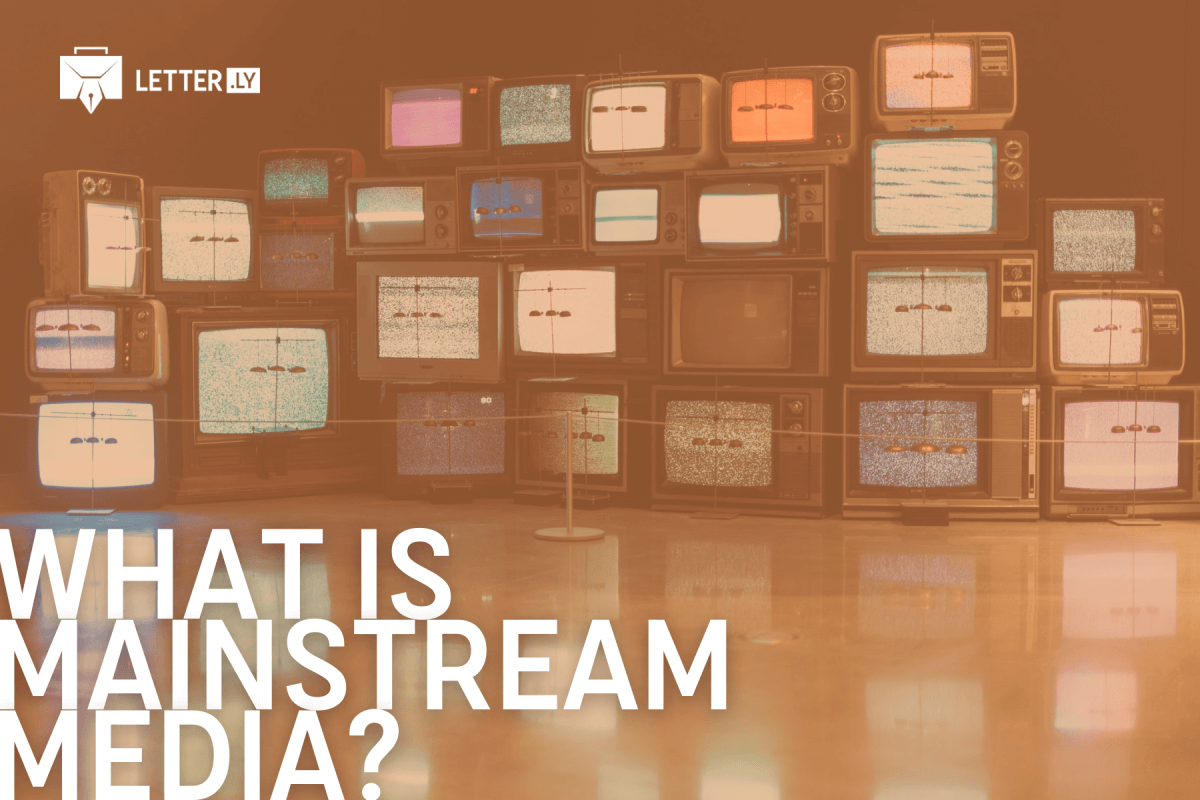 What Is Mainstream Media? Definition, Meaning, and Types

Although it has been around for centuries, many still wonder what is mainstream media exactly. Today’s complex media climate is home to numerous types of media outlets. Unsurprisingly, in this chaotic media landscape, it has gotten difficult to identify which ones are reliable.

In this blog post, we’ll explore what mainstream media is and which outlets are considered reputable sources of information.

What Is Mainstream Media?

The term mainstream media refers to the mass media that conforms to society’s dominant values, norms, and conventions. It includes television, radio, film, newspapers, magazines, and websites widely consumed by the general public.

Mainstream media is often accused of being biased and favoring certain viewpoints over others. However, it’s also where most people get their news, making mainstream media an indispensable news source. In an increasingly globalized and connected world, it thus plays a significant role in shaping public opinion and influencing decisions.

There are several different types of media that people typically think of when they think of news and information sources. These forms of media tend to have the largest audiences, and they are often considered the most influential.

Television is the most widely used form of mainstream media, with over 90% of households in the US having at least one television.

This type of media has been a dominant force for decades, and it’s a powerful tool for reaching large audiences. Its appeal lies in its ability to deliver a wide range of content, from news and current affairs to entertainment and advertising. What’s more, it’s often regarded as the embodiment of mainstream media definition.

Television also provides advertisers with an effective way to target specific demographics. However, television has faced increasing competition from other forms of media in recent years. Examples of competitors include the internet and social media. As a result, broadcasters have had to adapt their business models to remain relevant in the changing media landscape.

Despite the current challenges, television continues to be an essential part of the media landscape, and its influence is likely to continue for many years to come.

Radio is the second most popular form of mainstream media in the US. It’s a type of media that broadcasts audio content through airwaves. It’s one of the oldest forms of mass communication, and it continues to be an essential part of our lives today.

Radio can be used for various purposes, including entertainment, mainstream news, and education. It’s a highly portable medium that can be enjoyed anywhere, anytime.

Radio also has the unique ability to reach people in remote areas who might not have access to other forms of media. In addition, radio is relatively inexpensive to produce, making it an ideal choice for small businesses and organizations.

Out of all the mainstream media outlets, newspapers are the oldest, as they have been around for centuries. Unlike some other forms of media, such as radio and television, newspapers provide a written record of news and events that can be archived and referenced later.

In addition, newspapers usually have a local focus, allowing readers to stay up-to-date on what is happening in their community. Although the rise of the internet has led to a decline in newspaper circulation in recent years, many still consider newspapers important news and information sources.

Statistics on media show that 40% of households in the United States subscribe to at least one magazine.

A magazine is a type of mainstream media that consists of a collection of articles, stories, and other writings on various topics. Magazines are typically published on a regular basis, such as monthly or weekly, and are often aimed at a specific audience or market.

For example, there are magazines for women, men, teenagers, and children and magazines that focus on specific interests such as fashion, sports, or news. In addition to print magazines, there are also many magazines that are available online. While some magazines are free to read, others require a paid subscription.

What Is Mainstream Media? Key Takeaways

In summation, mass media is a term used to describe the most popular media forms: television, radio, newspapers, and magazines. Each form of mainstream media has its own strengths and weaknesses, but all four play an essential role in our lives.

In recent years, the mainstream media has faced competition from newer technologies, such as the internet and social media. Nevertheless, it continues to be an essential part of the media landscape.

What Is Mainstream Media? FAQ

What is an example of mainstream media?

What is the difference between mainstream media and social media?

What are some mainstream media sources?

There are countless mainstream media sources available today, ranging from newspapers and magazines to television and radio stations. Some of the most popular mainstream media outlets in the US include The New York Times, The Wall Street Journal, CNN, Fox News, and NBC.

What are the types of mainstream media?

There are plenty of types of mainstream media. The three most common are television, radio, and newspapers. Each type of media has its own strengths and weaknesses, which savvy marketers can exploit.

Mainstream media refers to the mass media that carries a large audience and influences society on a large scale. This includes news outlets, television networks, and radio stations. The exponential growth of alternative sources of information like social media has blurred the lines between mainstream and alternative media, pushing people to ponder questions — what is mainstream media, what are its different types, and which of these outlets are trustworthy.