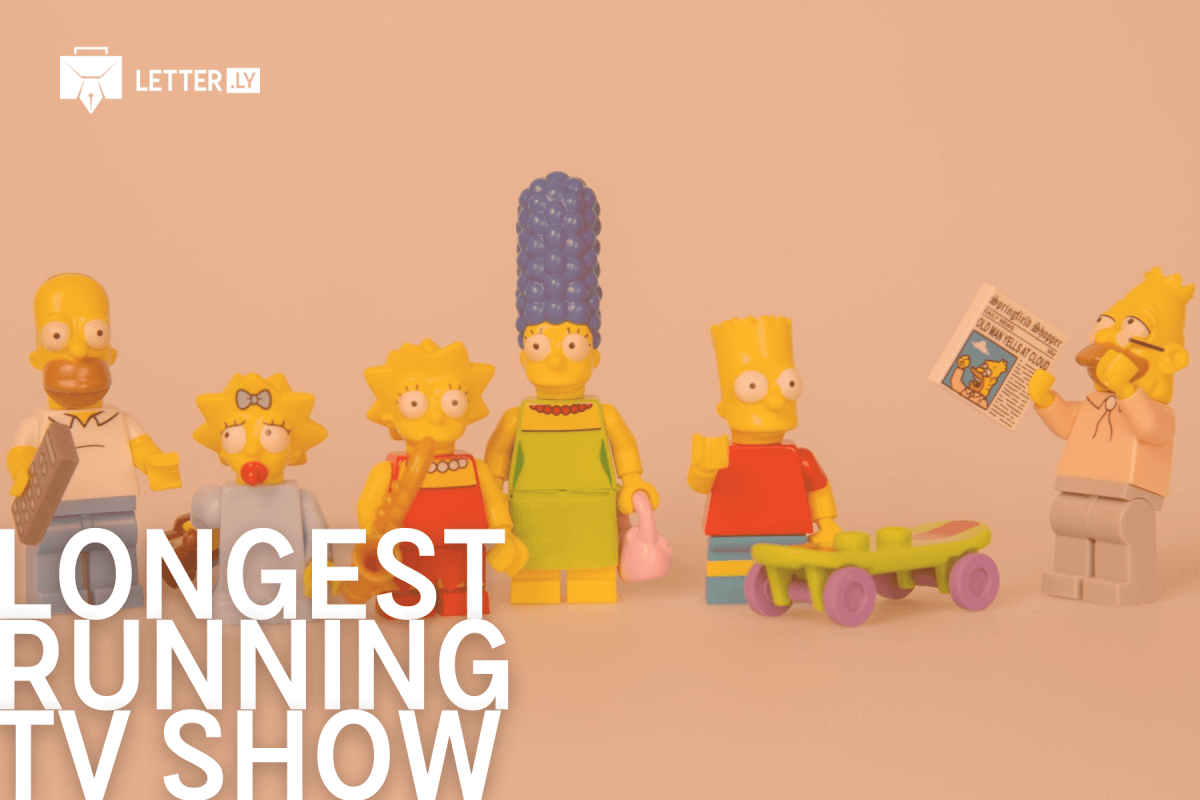 The Longest-Running TV Show: From Anime to Reality to Sci-Fi

What Is the US Primetime TV Show With the Most Seasons?

Oftentimes, a show that runs for many seasons becomes repetitive and starts lacking creativity and innovation. Unfortunately, we’ve seen it many times that a show runs for one too many seasons (or ten too many). Take Supernatural, for example. Or Riverdale. Or The Vampire Diaries.

Nevertheless, there are some series the US audience can never get sick and tired of. So what show has the most seasons?

The Simpsons has been on air since 1989 — so it’s been on for 33 years and 33 seasons (and 728 episodes!). It started as a series of shorts on The Tracey Ullman Show before being spun off into its own series. The Simpsons is a satirical animated comedy that follows the lives of the titular family, a working-class family from the fictional town of Springfield.

The show is known for its sharp wit, insightful social commentary, and lovable characters. In addition to its success, the longest-running animated TV show in America has also left a lasting mark on popular culture and became one of the most popular TV shows of all time.

Catchphrases like “Ay caramba!” and “Don’t have a cow, man” have entered the vernacular, and the show has been referenced in countless other TV shows, movies, and books. The Simpsons has won dozens of awards, including 34 Emmys.

Fun Fact: Wondering why the main characters are yellow? Has it ever occurred to you that that color catches the eye when you’re hopping through the channels? That’s why!

In the mood for a binge-watch? Here are two more long-running TV shows similar to The Simpsons:

What Is the Longest-Running Drama TV Show?

There’s nothing like a good TV drama to get the blood flowing. Of course, not all drama is created equal. Some shows are so over-the-top that they’re more comical than anything else. But some dramas are just made to remain popular and attract fans with each new episode.

One of those shows is Law & Order: Special Victims Unit, the longest-running of all American drama TV shows.

Law & Order: Special Victims Unit started airing in 1999. The show follows the investigations of a special unit of the New York Police Department that deals with crimes involving sexual offenses. The show has been praised for its realistic portrayal of the criminal justice system and its handling of sensitive topics.

SVU has also been recognized for its strong female characters, including Detective Olivia Benson, the lead character on the show. And if you’re a fan of SVU (if not, give it a try), you’ll be glad that the show is coming back with season 24 in the fall of 2022.

In the market for more marathon-worthy long-running drama TV shows? We’ve got you:

What Is the Longest-Running TV Game Show?

Watching other people compete on game shows is strangely compelling. Perhaps it’s the vicarious thrill of seeing someone win big or the schadenfreude of watching someone crash and burn.

So whether you’re a diehard fan or a casual observer, you’ve probably watched an episode or two of The Price is Right, which holds the title of the longest-running TV game show.

The Price is Right counts more than 9,000 episodes since it first aired in 1956 and remains one of the most iconic game shows on television. It has been delighting audiences with its mix of thrilling competitions and big prizes.

Each episode sees a group of contestants battle it out to win fabulous prizes, including cars, vacations, and even houses. The game is simple: guess the price of various everyday items, from toothpaste to TVs.

Our longest-running television game show was originally hosted by Bob Barker. These days, the show is hosted by Drew Carey, and it’s still just as much fun to watch.

And here are some more fun-to-watch game shows that made their mark on television history:

What Is the Longest Anime?

For the uninitiated, anime is a uniquely Japanese style of animation that dates back to the late 1910s and has become famous worldwide in recent decades. What sets anime apart from other types of animation is its focus on visual storytelling and its distinctive art style.

Anime often explores themes not typically addressed in Western cartoons, such as existentialism, loss of innocence, and contemporary society. As a result, anime has a broad appeal and can be enjoyed by viewers of all ages.

With that said, let’s introduce the longest-running anime show in television history — Sazae-san!

This anime initially ran from 1969 to 1974, with 7,701 short segments. For anyone who grew up in Japan in the 1970s, the anime series Sazae-san is a nostalgic favorite. The show centers on the titular character, a young woman who lives with her parents, husband, and son. Each episode follows Sazae and her family as they go about their everyday lives.

And here are more long-running anime shows you can watch with your whole family:

What Is the Longest-Running Soap Opera?

Ah, soap operas. A staple of daytime TV for more than half a century, these melodramatic shows have enthralled viewers with over-the-top storylines and larger-than-life characters. From scheming villains to long-lost twins, soap operas have it all. And let’s not forget the infamous love triangles (or quadrangles, or pentangles…) that always seem to be brewing.

Add in a dash of glamour and a healthy dose of drama, and you’ve got the perfect recipe for soap opera success. But which soap TV show has been on the longest? It’s the British program Coronation Street!

Having debuted in 1960, it earned the title of the longest-running TV series. This show follows the lives of the residents of a fictional Coronation Street in Manchester. Coronation Street — affectionately nicknamed Corrie — is known for its complex storylines, realistic portrayal of working-class life, and light-hearted humor in whopping 10,603 episodes (and counting)!

In recent years, Coronation Street has been praised for its portrayal of everyday life and its focus on social issues such as immigration, homelessness, and addiction.

Despite its popularity, Coronation Street has not been without controversy. The show has come under fire for its dark and depressing storylines, which some viewers find too sad. However, others argue that these dark elements make this soap TV show so compelling — no wonder the show has also been honored with numerous awards, including 7 BAFTAs.

Fun Fact: The video for I Want to Break Free by Queen is a parody of the show and its characters.

What Is the Longest-Running Animated TV Show?

Animated or cartoon TV shows appeal to us differently than live-action TV shows. Maybe it’s because we can suspend our disbelief a little more easily when we’re watching cartoon characters, or perhaps it’s just that animation allows for a level of creativity and storytelling that live-action simply can’t match.

Whatever the reason, there’s no denying that animated TV shows have a devoted following, sometimes even for decades! And Sandmännchen holds the record — it’s been on TV since 1959!

If you grew up in Germany, chances are you remember watching Sandmännchen before bedtime. The eponymous character of the longest animated series is a little sandman who sprinkles sand into children’s eyes to help them fall asleep. But that’s not all he does — he also tells them stories and takes them on magical adventures.

Give this legendary show a chance — you might just find yourself falling asleep with a smile on your face. If you were wondering what show has the most episodes, we could tell you that Sandmännchen sits comfortably on the throne for the longest-running TV show in the world by episodes. It has 22,000 of those!

Fun Fact: If you’re a fan of German industrial metal, you must be familiar with bands Rammstein and Oomph! But did you know that these bands referenced this show in their songs (Mein Herz brennt and Sandmann, respectively)?

Want more long-running animated and cartoon shows? Here you are!

What Is the Longest-Running Sci-Fi TV Show?

Sure, some people might say that sci-fi shows are totally nerdy and escapist. But those people are missing out on some seriously awesome TV! Sci-fi shows are all about exploring the impossible, whether it’s time travel, aliens, or superhuman abilities.

But closer inspection reveals that sci-fi shows often have a lot to say about our world. Through their use of speculative fiction, these shows can explore social issues in a way that is both entertaining and thought-provoking.

Okay, if you’re one of those nerds, you probably know what’s the longest-running sci-fi show, but let’s say it anyway. It’s Doctor Who.

First airing in 1963, Doctor Who is a British show about a time-traveling Time Lord from the planet Gallifrey. He travels through time and space in a ship called the TARDIS (Time and Relative Dimension in Space). The TARDIS takes the shape of a police box, a type of public telephone booth used in Britain in the 1960s.

The Doctor has many adventures with his companions, and each episode typically ends with a cliffhanger. They battle various evil beings, such as Daleks and Cybermen, and protect the Earth from destruction.

Doctor Who has been hugely popular over the years, spawning 37 seasons, numerous spin-offs, and parodies. Though it has undergone many changes over the years, Doctor Who is still popular with fans around the world, and it’s safe to say it remains one of the best shows of all time.

To all our fellow nerds out there, here are more long-running sci-fi TV shows worth watching (yes, we know you’ve probably seen them all):

What Is the Longest-Running Reality TV Show Still on the Air Today?

Much to the chagrin of our highbrow friends and family members, reality TV remains one of the most popular genres on television. And it’s not hard to see why. Reality TV is the perfect escape from our own lives, offering a vicarious thrill as we watch other people struggle through challenges, both fake and real. And the longest reality TV series title goes to FOX’s Cops.

There’s something both exhilarating and anxiety-inducing about watching a police chase unfold on TV. On the one hand, you have the satisfaction of knowing that justice is being served; on the other, you can’t help but wonder if the people involved will be okay. That’s part of the appeal of Cops, a reality show that has been captivating audiences since 1989.

Every episode features real-life police officers pursuing suspected criminals, and the suspense is often palpable. But Cops is more than just entertainment; it’s also a fascinating glimpse into the world of law enforcement. This show is a must-watch for anyone who has ever wondered what it’s like to be a cop.

If you want to sit back and enjoy more long-running reality shows, here are our top choices:

We’ve all witnessed shows getting canceled after a few years due to losing viewers, not being profitable enough, or just being plain bad. However, those rare gems have withstood the test of time, staying culturally relevant over decades.From soap operas to reality TV, all the way from old comfort-food TV shows to futuristic sci-fi, we’ve looked at the contenders for the title of the longest-running TV show. But what makes them so popular? Perhaps it’s the escapism they offer, or the connection viewers feel with the characters. Whatever the reason, chances are these shows will still be remembered decades from now.