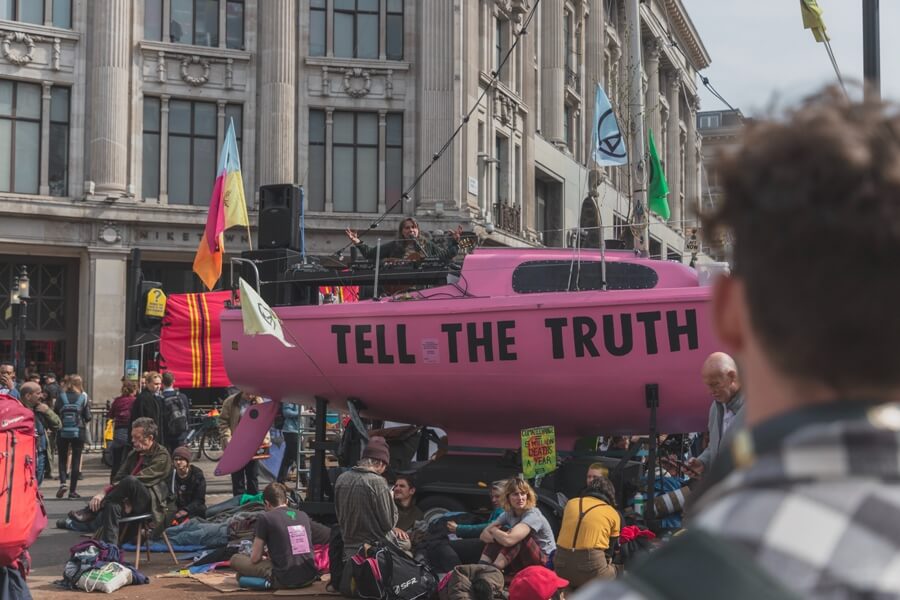 Gonzo journalism can be found in both fiction and non-fiction works. This style of journalism is characterized by its intense, first-person approach. Gonzo journalists often reject traditional journalistic standards, instead focusing on their own experiences and feelings.

Today, gonzo-style journalism continues to be practiced by journalists and writers worldwide. While its popularity has waxed and waned over the years, gonzo journalism remains an integral part of the literary landscape.

What Is Gonzo Journalism?

Gonzo journalism is a style of writing that breaks away from traditional reporting methods. Instead of relying on objectivity, facts, and quotes, gonzo journalists rely on their own experiences and observations to tell the story. This often results in a highly personal and subjective account, which can be more engaging and enlightening than traditional journalism.

But what does gonzo mean?

The etymology suggested by Lexico is from Italian gonzo (meaning foolish) and/or Spanish ganso (fool, goose).

The term was first coined by Hunter S. Thompson, who is perhaps the most famous practitioner of this style. Thompson’s work often combined elements of fiction and reportage, creating a unique and unforgettable hybrid. Today, many writers still use gonzo journalism, although it has largely fallen out of favor with mainstream news outlets.

Hunter S. Thompson was a journalist and author, best known for inventing the genre of gonzo journalism. He first used the style in his article The Kentucky Derby Is Decadent and Depraved, published in Scanlan’s Monthly magazine in 1970. This groundbreaking article set the stage for Thompson’s later work, which often blurred the lines between fact and fiction.

Gonzo journalism, as he saw it, eschews traditional journalistic objectivity in favor of immersing the reader in the writer’s experience. Gonzo journalists hope to give readers a more intimate, visceral understanding of their subject matter.

In addition to his work as a journalist, Thompson also authored several books, including the bestselling novel Fear and Loathing in Las Vegas.

Throughout his career, he remained an outspoken critic of what he saw as the hypocrisy and emptiness of American society. His darkly comic writing continues to be hugely influential, even after he died in 2005.

Several key elements are essential to gonzo-style journalism. Firstly, it is important to note that gonzo journalism is not the same as simply writing in the first person. While first-person narration can be found in gonzo journalism, it is not a defining genre characteristic.

That said, several other elements are integral to gonzo journalism. These include:

Gonzo reporting regularly emphasizes immersion over objectivity. The reporter is usually also the main character of the story, and the events are often highly subjective. This can make such articles more akin to fiction than traditional reporting, but they can also be more engaging and visceral.

Ultimately, gonzo journalism is all about pushing boundaries and telling stories in new and innovative ways.

Why Has Gonzo Journalism Become So Popular in Recent Years?

Although the gonzo journalism movement first started in the 1970s, it has seen a resurgence in popularity. This is likely because this type of journalism offers a more immersive and personal experience than traditional reporting. Gonzo journalism provides a much-needed respite from the noise in an age where we are constantly bombarded with information.

This type of journalism often provides a more honest and accurate portrayal of the world than traditional reporting. This is because journalists are not afraid to express their own opinions and feelings about their subjects. As a result, gonzo journalism can be an invaluable tool for understanding our world.

What Are Some Examples of Gonzo Journalism?

Apart from the already mentioned Hunter S. Thompson and his works, there are many other examples of gonzo journalism.

Jeet Heer’s writing style is defined by its highly personal and emotional approach. He often writes about his own life and experiences to connect with his readers more intimately. This technique allows him to explore controversial topics with honesty and openness, which is why his work is so widely respected. In addition, Heer’s use of humor and pop culture references makes his writing accessible and enjoyable to read. Whether he’s writing about politics, relationships, or the media, Heer’s unique voice always shines through.

Articles written by Matt Taibbi are another well-known example of gonzo journalism. For over a decade now, Matt Taibbi has been one of America’s most influential political writers. His work is characterized by a gonzo journalism style that combines in-depth reporting with biting satire. In recent years, Taibbi has become increasingly focused on the issue of economic inequality, and his work has helped shine a light on how the rich and powerful have rigged the system in their favor. While some have criticized Taibbi for his sharp language and take-no-prisoners approach, there is no denying that he is a powerful voice for those who feel that the deck is stacked against them.

Tom Wolfe is an early writer of new journalism, often characterized by his highly personal style and lack of objectivity. Rather than simply reporting the facts, Wolfe relies on his own observations and experiences to provide readers with an intimate look at his subjects. He first rose to prominence in the 1960s with his New York City art scene coverage. He later wrote bestselling books such as The Electric Kool-Aid Acid Test and The Right Stuff. While some have criticized Wolfe’s writing as self-indulgent, there is no denying that he has had a profound impact on American journalism. His work has inspired generations of journalists to push the boundaries of what is possible in their field.

How to Write Your Own Gonzo Story

Inventiveness, eccentricity, and willingness to take risks are the hallmarks of the gonzo journalist. It’s a style of reporting that is highly personal and often outrageous. If you’ve ever dreamed of writing your own Gonzo story, here are a few tips to get you started:

Find your voice: The first step to writing in any style is to find your voice as a writer. For gonzo journalism, this means channeling your inner rebel. Let your freak flag fly, and don’t be afraid to push the boundaries.

Embrace chaos: The beauty of gonzo journalism is that it thrives on chaos. Embrace the unexpected and use it to your advantage in your story.

Go all-in: When writing a gonzo story, you have to be willing to go all in. Be prepared to put yourself in uncomfortable — even dangerous — situations to get the story you want.

Have fun: Above all, remember to have fun. Gonzo-style journalism is all about pushing the envelope and enjoying the ride. So strap in and enjoy the journey.

These are just a few tips to start writing your own gonzo story. Remember, there are no rules for this style of writing – so let your creative juices flow and see where they take you. You might just end up with a story that’s truly out of this world.

The Risks and Advantages of Gonzo Journalism

Because the journalist is so personally involved in the story, there is a danger of them completely losing objectivity. Gonzo journalism also often relies heavily on anecdotes and personal experiences, making it difficult to verify the accuracy of the information contained within. Additionally, the subjective nature of gonzo journalism means that it is often open to interpretation, leading to misunderstandings.

On the other hand, it can be incredibly exhilarating as a unique form of writing.

By embracing subjectivity, writers can create a more intimate and engaging connection with their readers. Additionally, gonzo-style journalism often allows for greater creativity, as writers are free to experiment with different voices and styles. As a result, it can be an advantageous form of writing for both writers and readers alike.

What Is Gonzo Journalism? The Takeaway

Gonzo journalism is a unique and exciting form of writing that can inform and entertain readers. While it is not without critics, it remains an integral part of the journalistic landscape.

It can be an effective way to report on current events and offer readers a new perspective. As we move forward into an increasingly complex and fast-paced world, gonzo journalism may become even more critical in our efforts to make sense of it all.

What is the definition of gonzo journalism?

Gonzo journalism is a style of reporting that is subjective and often personal in nature. Unlike traditional journalism, which strives to be objective, gonzo journalism is more concerned with conveying the writer’s point of view. This approach often results in a more colorful and vivid account of events, as the writer is not afraid to offer their own opinions and observations.

Why is it called gonzo journalism?

Who is the pioneer of gonzo journalism?

Hunter S. Thompson is often credited as the pioneer of this writing style. Thompson was known for his wild and nonconformist lifestyle, which often bled into his writing. His most famous work, Fear and Loathing in Las Vegas, is considered a classic of gonzo journalism. Thompson chronicles his drug-fueled trip to Las Vegas with his attorney, weaving together fiction and historical fact to create a surreal and savage portrait of America. While Thompson is the most well-known gonzo journalist, he is far from the only one; other notable examples include Tom Wolfe, Joan Didion, and Hunter S. Thompson’s nephew, Juan F. Thompson.

Are there any gonzo journalists working today?

Yes, there are many gonzo journalists working today. The reporting style has evolved over the years, but it still retains its core tenets of being subjective and personal. In recent years, gonzo-style journalism has been used to describe a wide range of writing, from first-person accounts of life in North Korea to immersive reporting on the world of professional wrestling. As long as writers are willing to push the boundaries of traditional journalism, gonzo journalism will continue to be an essential part of the literary landscape.

To genuinely comprehend what is gonzo journalism, there’s no better place to start than works of reporters bold enough to implement it. As previously mentioned, Matt Taibbi is one of the most prominent names connected to modern gonzo journalism. Gonzo journalism is also practiced at Vice, as their team uses this type of reporting to prompt greater dialogue about society in general.